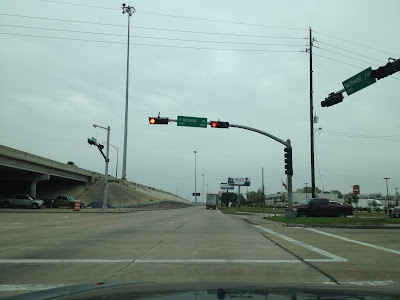 At this point prior to the construction, you entered an older part of 290, where the concrete was visibly older and the barriers (between the road and the edge of the bridge) were shorter, all traffic was shoved over part of the way to the not-quite-aligned-with-the-older-lane-striping Bott's dots on the road. This section covers everything from the Little York Park & Ride ramp to the creek near the bowling alley. The construction also rebuilt the West Little York Road bridge.

14441 - Fair Lanes Windfern operated by Fair Lanes (a national chain of bowling alleys) opened in April 1979 as a 32 lane bowling alley. In July 1980, the bowling alley was robbed after hours and the three employees were shot in the head, execution-style. The lone survivor had to call his mother because there was no 911 system in place in Houston at the time. In the mid-1990s it became part of the AMF chain when Fair Lanes was acquired, and also received a repaint in the 2010s.

Westbound (North)
14996 - Originally a Holiday Inn from the early 1980s until sometime around 2003, 2004, my 2002 directory (of Holiday Inn) says that this had 193 rooms across three floors with exterior corridors [this right here would mean that they couldn't be a Holiday Inn after 2007 without a major re-do as the new rules required interior corridors], free parking [yes, this was listed as a feature despite being nowhere near any areas of town where parking is at a premium], a restaurant with room service, a sports bar (with complementary hors d'oeuvres), a coin laundry, and a meeting room for up to 200. The transition to "Hotel Preet" laid waste to a lot of the nicer features of the Holiday Inn, with the pool closing after 2009.

14900-92 - This strip mall, Brookhollow Village seemed mostly inactive during most of the late 2000s and early 2010s thanks to the fact the largest tenant (14900) was vacant. Originally home to a Safeway, the grocery store became AppleTree in 1989 when the Houston division of Safeway was spun off, and then Kroger after AppleTree went bankrupt and sold off most of its stores in 1994. Kroger closed around 2005, and according to HAIF it spent some time as some fly-by-night furniture stores (one search turned up "Furniture Giant"). In spring 2012, after a period of vacancy, it reopened as K1 Speed Indoor Track Racing. The strip mall also has Subway as a dining option (until relatively recently Fajita Willie's as well, now replaced by La Fogata Tex Mex Grill), as well as a few other shops, including a Jack's Carpet at 14990 which I swear did not replace the one that was torn down. What originally tipped me off to the presence of an old Safeway (and by extension, AppleTree) was its distinctive hexagon sign. The space next to the Safeway/AppleTree/Kroger/indoor go-kart track was an Eckerd back in the 1980s and 1990s, common to old Safeway stores in the Houston area. It's now an events center.

14640 - This Sherwin-Williams Paint Store is brand new compared to other buildings in this stretch.

14620 - The Rudy's Country Store & Bar-B-Q is fully featured with a gas station in front of the restaurant.

14400 - The Houston First Church of God has been around at least as long as the bowling alley has, though for some reason Google marks it as "ARABIC CHRISTIAN CHURCH HOUSTON" these days, even though they're still there just as they had been prior to 1980.