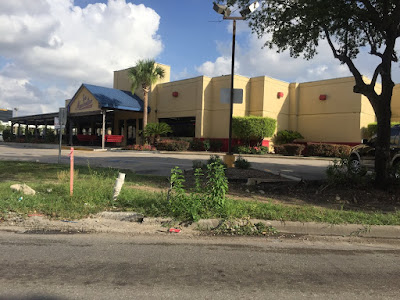 Originally this was a Shoney's, long since departed from the Houston area.
This next section is a large commercial corridor developed largely in the 1990s, specifically covering from Guhn Road to Northwest Central Drive. This is admittedly a bit of an abbreviated view that neglects numerous office towers, the Tinseltown theater, and a whole strip center. While it was clear that this area was up and coming in the 1990s, it's somewhat run-down area--there's usually multiple panhandlers at the intersection of Tidwell and Hollister off the freeway.

Eastbound (South)
13485 - Originally a Shoney's, this is now Mambo Seafood since around 2004 after being a Chinese restaurant for several years. (See more at The Houston Files)

13451 - The Luby's that was here was closest to their headquarters (half a mile down) closed sometime around summer 2018, a sign that the company was in real trouble and neglecting the restaurants.

13157 - The Aquarium World in this shopping center closed for good at the end of 2018. The Facebook page is archived here (why in German, I have no idea).

13013 - This office tower was built in the early 1980s with its only tenant, Harris County Appraisal District. Their website has been invaluable in the building of this site. A view from the other side (September 2018) can be seen here.

Westbound (North)
13484 - This Walmart opened as an ordinary Wal-Mart. Later on, a Hobby Lobby was built next to it at 13470 Northwest Freeway, and eventually was demolished for an expansion to the store (becoming a Wal-Mart Supercenter before new branding changed the name again).

13480 - This Taco Cabana got the woefully bland pink sign that Taco Cabana has been replacing its signs with (replacing the neon/black versions) but it was still marked for closure anyway in January 2020.

13232 - This Red Lobster operates in a modified building that was originally the home of sister restaurant China Coast. When Darden shut down the chain in 1995, many restaurants, including this one, were converted to Red Lobster.

12930 - Transtar Federal Credit Union, picture from 2018 (by author) here. Logan's Roadhouse can be seen in the background.

12910 - Built as a Joe's Crab Shack in 1997, in 2008 the restaurant closed and was converted into a new concept by then-parent company Ignite Restaurant Group, BrickHouse Tavern + Tap. (See more at The Houston Files)

12909 - Hampton Inn, here since 1998. Despite the official branding these days as "Hampton by Hilton", the hotel kept its older and far less awkward moniker when it completed an inside-and-out renovation in 2018. The original hotel can be seen here from across the freeway. A better picture could probably be found elsewhere.

Off the Freeway
7500 West Tidwell Road - A Sonic Drive-In was built here in 1994. After it closed around 2014 (lease expiration?), it was torn down and rebuilt as Twistee Treat, a walk-up ice cream restaurant built and opened in 2016. It previously appeared that the construction just tore down the canopies and added a large ice cream sculpture on top of the kitchen building, but it does appear to be different construction.

7887 West Tidwell Road - This hotel, a Comfort Inn (officially "Comfort Inn Hwy. 290/NW") was apparently built as a Days Inn & Suites back in 1997. Unfortunately, as this writing, all my hotel directories are packed away, so I can't give further information on it.