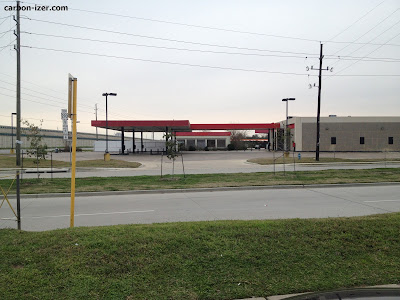 Becker Road is the first interchange with "real" things on it these days (and it's been four-laned as of 2012-2013). In the old days of pre-freeway 290, this was another troublesome area as the two sides of Becker Road did not continue straight across 290, requiring a slight bend in the road over the highway median, with this oversight only being fixed when the road was four-laned.

Community of Faith (16124 Becker Road) - A church (not related to The Community of Faith in Houston proper) which has a massive facility (originally built circa 2007 and built an expansion as of spring 2015), a super-stylized cross (shaped like a boomerang) and a bright electronic display screen which was toned down around late 2014 since drivers don't like a miniature sun 24/7 just off the freeway that's ten times worse when it's foggy.


=WESTBOUND (NORTH)=
Shell (32150 US-290) - I've gotten relatively cheap bottled water here (at least for gas station standards). The truck stop features a Taco Bell and Church's Chicken inside, though it's just two counters in a common seating area (and not particularly well-lit). Here's the front of the fast foods from the outside (taken 2/2015). If you're coming from West Houston Archives, you'll notice that the Taco Bell sign is now painted more of an orange color (I'm pretty sure it's not just the sunlight) and has lost its "Express" moniker.

Exxon (32202 US-290 Bldg. A) - An abandoned truck stop, "290 Express Way", which closed, according to Google Maps Street View, between early 2011 and early 2013). The truck stop originally opened between 1995 and 2004 and looks like it's been closed for a couple of years. The only reference I can find is a 1999 article where the owner described the major accidents happening at Becker Road, since it was not a freeway at the time nor had lights. I don't know why it closed, either problems stemming from the widening of Becker, or the fact that it may have been a less attractive option than Shell, as a good truck stop usually requires a prominently advertised restaurant option (usually fast food, but not always). A few photos I have (all from 2/15) include the empty canopies of the Exxon, the fading and deteriorating billboard, and the Exxon roadside sign—note the older Sonic in the background with the red and yellow neon.

Sonic Drive-In (32202 US-290 Bldg. B) - This Sonic looked like the older prototype of Sonic stores but is still very much open. I noticed as of June 2017 they finally did update the red and yellow perimeter neon to the modern Sonic prototype of the gray plastic tubing or whatever (yeah, I know that's an unflattering term). Despite the fact that it looked pretty old, it actually wasn't, it was actually built in 2004-2005.