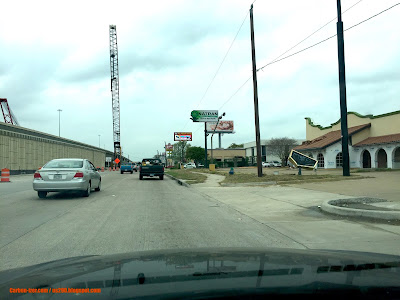 On the frontage road south of Bingle, looking northwest (Feb. 2018 from author)
Not listed below is the Northwest Freeway Center, occupying a block of addresses at the southwest corner of West 43rd Street and Northwest Freeway. Historically, the anchors were Venture (later Big Kmart), Service Merchandise, and Toys R Us, but today are Burlington (Coat Factory), Joe V's Smart Shop, and Fallas Discount Store. Instead, pictures and more details on the Houston Files. This even goes so far back to one of the Service Merchandise stores I remember seeing along the freeway, though that's understandably a long time ago. The original signage (nothing special) was torn down in the widening, but nearly all the center's once first-line tenants have fled in relatively short order. This covers Northwest Center Drive to the creek just north of Saxon Drive and south of Chantilly Lane.

12801 - Built as a ten-story 300-room Ramada Inn in 1980 (complete with a full, multi-room suite on top of the hotel) and briefly going under the "Ramada Plaza" name from 1995 to Sept. 1999 (Ramada's top-tier hotel, at which time it adopted the Crowne Plaza name. The hotel stayed as Crowne Plaza until 2018 when a renovation began. The renovation changed the upper level as well, before the renovation you could even see chandeliers in the upper level at night sometimes. The renovation, which continued into 2019, changed the hotel into the Grand Tuscany Hotel, and removed (or enclosed, still researching) some exterior-facing hotel rooms on the southwest side.

12747 - Originally the home of Gallagher's Restaurant & Pub until around the late 1980s, the Gold Cup renovated and expanded the space in the early 1990s, converting the restaurant into a sports bar and strip club. In the mid-2010s it closed (as early as spring 2013, that's when their Facebook page stopped updating) due to the freeway widening and quickly covered with graffiti (even moreso than West Houston Archives' pictures) before TxDOT took it down in 2016. All that remains today is a gated-off parking lot surrounded by trash and a few of the palm trees that Gold Cup planted to provide for its landscaping.

12503 - Like the Chevron at Senate, the Exxon here, originally built around the late 1990s as a flagship "On the Run" store before Exxon divested them in the mid-2010s to Star Stop, this has been boarded up since around 2015 with the gas canopy gone and the vandalized convenience store (and car wash) still intact.

12445 - This automotive repair shop is listed as Northwest Shell Auto Care despite losing the Shell branding and the gas pumps years ago.

12441 - Northwest Dental Center (now closed since around the late 2010s, dentists moved out around the time all the front parking was removed) is an enigma. at 12241 Northwest Freeway had to be restaurant (it held Lee's Golden Dragons dance troupe for a while) based on its large building and larger parking lot which is of course underutilized. Unfortunately, I haven't yet found out what was there, but I'm guessing it was probably a steakhouse (it was insurance offices in the mid-1980s, which may or may not disprove my theory).

12439 - Opened 2001 as an ordinary Holiday Inn Express Hotel & Suites (attractive as far as Holiday Inn Express hotels went) and sold in 2013 (assuming the Quality Inn & Suites name that year, as it was going to lose the HI name), the hotel went through some unfortunate changes a few years after that when highway construction forced the demolition of the swimming pool (located in front of the building), the sign (forcing a replacement much closer to the building) and a covered drive-up. As an aside, my 2003 hotel guide says that this hotel contained 61 rooms spread out on three floors. The "Now Open" banner remained on the Quality Inn until it was sold again, rebranding as OYO Townhouse Houston Brookhollow. As of late 2019, renovations are ongoing.

6500 West 43rd Street - Built as the attractive Bridgegate Apartments in 1973 (complete with your choice of green or gold shag carpeting!), this apartment complex (now Vintage Apartments, as it has been since at least the late 1990s) has seen better days. Several buildings were torn down in late 2015 for freeway construction.

11911 - Creekwood Apartments, like Bridgegate/Vintage, has befallen a similar fate, built in 1972, shag carpets as feature, had some of its units torn down during construction.

Westbound (North)
12862 - While it's a little hard to see based on my only photo from 2015, this Denny's still has its older logo above the doorway.

12830 - A second generation restaurant like others in the stretch (see Tidwell/Hollister), Twin Peaks originally opened as a T.G.I. Friday's back in 2000 but around 2011 it closed and was renovated into its current tenant (likely 2012).

12700 - Originally home to Handy Dan Hardware. It's now 24 Hour Fitness (after serving a stint as an Academy), but it has a different address (and does not use up all the space). The Academy later moved to the old Randalls space in the next entry, while the Randalls had moved to a Kmart (also described further on), because the Kmart had moved onto the old Venture. Quite the switchover, eh? Here's a photo from 2015 from the freeway...notice that the building described below is gone with the new building yet to be built.

5101 Bingle Road - Originally built as a Champ's and later serving as Bravos Mexican Restaurant, the restaurant closed in spring 2014 with the building and its cool Wendy's-like solarium window being taken down in August of that year. A year later, a multi-tenant was built there featuring Jimmy John's, MetroPCS, and a Dunkin' Donuts/Baskin-Robbins store. The one time I personally went there, I endured the most miserable service I've ever had at a fast food restaurant and have no intention of returning.

12460 - The green sign with a smiling flower for Natran Green Pest Control replaced the rather plain sign for the Red Onion's corporate offices, which can be seen here, from 2015.

12440 - The description for the late Cafe Red Onion from Google mentions "Hefty portions of imaginative South American fare are dished at this family-friendly cantina" but a 2008 review from Fearless Critic Houston Restaurant Guide paints a far different picture, with chicken constituting most of the menu, a high plate-split cost, and far too many mediocre items. The multiple-location restaurant is no more (the office, described above, is gone), and the space was announced to become a location of El Tiempo Cantina not long after its closure in 2015, but like Gulf Freeway, the restaurant's construction stopped and restarted, eventually opening in December 2018.

4900 Federal Plaza Drive - This Holiday Inn Express & Suites Northwest-Brookhollow began construction before the park and ride closed. I wonder if it was always the plan to build it following the ramp's closure or if they were okay with the ramp being just thirty feet away from the pool area.

6301 Pinemont Drive - Opening on March 27, 1989, the Pinemont Park & Ride was a park-and-ride lot with 1,000 parking spaces and both served as a bus terminal and an access point for Northwest Freeway's HOV lane, serving commuters for over two decades before closing on January 24, 2014, with the ramp being disassembled that spring. Since then, nothing has come of the space (low-income housing met with heavy resistance).

12230 - Lindsey's Office Furniture built around 2009-2010 is located in front of the hotels and formerly next to the Pinemont ramp. The second floor of the building appears to have never been occupied.

4850 Federal Plaza Drive - The Fairfield Inn & Suites by Marriott Houston Brookhollow was completed in 2019, well after the ramp was dismantled.

1 Justice Park Drive - After over years of construction (groundbreaking in 2004 or 2005), this branch of the Federal Bureau of Investigation opened in 2009, with walls said to be a foot thick. The architecture is strange, it's bright green and has white "+" and "#" signs built into the walls. Your tax dollars at work!

12020 - One of the first "old" McDonald's to be torn down and rebuilt in 2008 with the "yellow eyebrow", the original version of this looks like it had the drive-through actually retrofitted in later and had some sort of playground between the store and the northbound frontage road.

5305 Bingle Road - If I recall, this Greater TEXAS Credit Union was dedicated in 2009. It is a full-service bank, but interestingly, the tellers in the bank aren't visible to customers, all transactions, even inside, are handled with video communication and pneumatic tubes.

<< Back to Tidwell Road and Hollister Road
>> Next Exit: Antoine Drive and West 34th Street