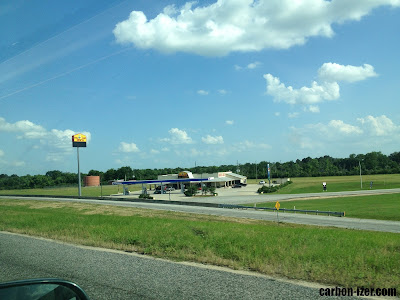 As of this writing, the exit to Fields Store Road is closed, and the outer eastbound lane where this was taken has moved to the former inner shoulder of the westbound lane.

Until the construction of what is now Irv's began construction, Field Store Road was solely access to Waller proper with no freeway-side attractions (well, except an LDS church and an elementary school).

Eastbound (South)
40203 - Field Store Road got its start as a freeway destination when a small gas station (Chevron brand) began building on a cul-de-sac created during freeway construction. "Rocky's B-B-Q Grille" opened in summer 2010 but within its first few years, it changed hands and became Field Store BBQ (at least by my memory...for some reason I remember being it under construction in early 2009), then Irv's Field Store by 2013, then eventually simply Irv's with a repainted red sign by August 2014. Not long after it was simply "Irv's", construction began next door which by March 2015 was revealed to be a new gas canopy with diesel (the canopy is a simple green one) with a large concrete pad for trucks. That's right: they "upgraded" to being a truck stop. For Irv's, I actually have before and after pictures. Here's my picture from May 2014, back when it was still Field Store. Notice obviously-tacked-on later "Irv's" sign. My second picture comes from December 2015, with what Irv's looks like today. Sorry it's a bit darker (a lot darker, actually) than it should be, it was a new camera. In 2019, Waller began to build a water tower behind the gas station. A visit showed that Irv's has some video gambling machines, but don't get too excited, they're for entertainment use only with small, non-money prizes.

Westbound (North)
40202 - The opposite direction has a building called NCI Metal Roofs. I'm not sure when it was built, but it was prior to 2003 (though if it was always that case, I'm not sure). [UPDATE: For some reason, around late December 2018 or early the next month, the signage color changed.]

>> Next Exit: Waller-Tomball Road/AJ Foyt Parkway
Posted by Pseudo3D at 11:00 AM