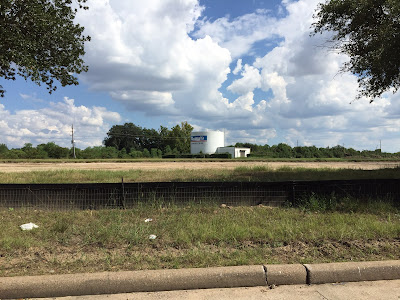 The tank still says Randalls Distribution Center for now... (9/18)
Starting from the point where Cypress North Houston splits off from 290 at a forty-degree angle, this section of 290 was the "distant rural developments" in the 1970s and not even becoming fully developed until the end of the 1990s. It also starts a point where it is primarily industrial west of the railroad, though this continues primarily along the original Hempstead Road corridor.

It also definitely looks like extending Cypress North Houston was on the books at one time, with the stubbed-out section on the other side (built in the late 1990s) with space for an underpass or something, but eventually the extra right of way just became a small park, and when the 290 widening plans were drawn up, they didn't include an additional bridge.

This section continues to Ladino Road and North Berwick Road (the exits and entrances to Huffmeister were switched in the 290 redevelopment).

Westbound (North)
23240 - This Valero just has a generic food mart, and is listed as "Mini Mart Valero" in many listings. In 1995, this was under "Mini-Mart Texaco", but that doesn't mean it might not have served under a Diamond Shamrock (or another brand) prior to Valero in the mid-2000s.

23138 - Tex-Fab Inc. has been here in some form or another since 1973 but expanded in the 1980s. They fabricate pressure vessels for the petrochemical industry and around 2017 did a repaint, though their logo didn't appear on the building for nearly a year afterwards.

22602 - One of the oldest surviving structures along the Northwest Freeway corridor, Cy-Fair High School opened in 1941 and was dedicated by Eleanor Roosevelt, though it's been modernized and expanded several times.

11111 Telge Road - At some point Arnold Middle School opened adjacent to Cy-Fair, and it appears that there's an elevated walkway connecting both schools, though this is probably just a utility line.

22222 - This strip center was built at the same time, and filled out faster than 22224 did. It contains only Red Wing Shoes (suite A-1) with much of the space being taken up by Houston's First Baptist Church, which moved out in August 2017 to a full campus, with Loopnet advertising the space soon after.

21904 - Weiser Air Park is a small airport for smaller aircraft, and it is clearly grandfathered in from another time. The edge of the runway is just 830 feet away from the westbound mainlanes of 290 and 630 feet to the westbound frontage road.

21902 - The Cypress VFW Post 8905 has been here for years, and it looks like Gentry Road (which should've started about where their driveway is) was never built out to begin with.

Eastbound (South)
22770 North West Lake Drive - It's a bit hard to see, but 84 Lumber was built in 2007 with a functional rail spur. The question is what used to be there before. There was a lake on the other side of the railroad with a small dock that was drained in 2016 (and a building constructed in 2017) but the site of 84 Lumber appeared to have (prior to 2001) a swimming pool (not quite Olympic-sized). Access to this area (and later 84 Lumber) included a railroad crossing complete with lights and gates, but this was removed in 2008.

10700 Telge Road - For years the Randalls Distribution Center was here with a large visible tank with a Randalls logo, though as of August 2018 has been partially covered up and may disappear in the near future. This was the Randalls Distribution Center, which had been operating since circa 1983 and expanded in 1999, adding a large traditional warehouse to the south and a freezer addition to the north (the old building had just perishables). Unfortunately, in spring 2017, it was shut down as part of consolidating the Houston Division with the Southern Division of Albertsons. This ended more than a decade of rumors whether Randalls would be sold or shut down, and while the stores continue to operate, the distribution center under the Randalls name has reached the end of the line. I always thought the trucks were going strange ways...they actually exited Highway 6 at 290 and went through Bryan-College Station instead of going straight toward Austin via 290, and they did this to the very end. They also supplied the Louisiana stores and very briefly, Albertsons stores in Florida. Following the merger, Albertsons trucks could actually be seen going in and out of the plant, though I was told the drivers going to Louisiana were still part of the residual SuperValu ownership that Albertsons is trying to phase out. As of early 2018, the former distribution center has been sold with the new owner going to sub-divide it. Randalls, of course, still operates in Houston despite closing down even more stores since Albertsons' ownership. It is a shame, especially as Albertsons' time in Houston was known for large stores and heavy expansion, and the fact that they are trying things very similar to the way Randalls used to do it (like "Market Street Idaho"). The future plans for this center, as of this writing, are to demolish the tank and part of the 1983 building (to make the southern 1999 addition a separate building), and then add three new buildings under the name "Highland Grove Business Park". [UPDATE: In January 2019, the Randalls tank was demolished.]