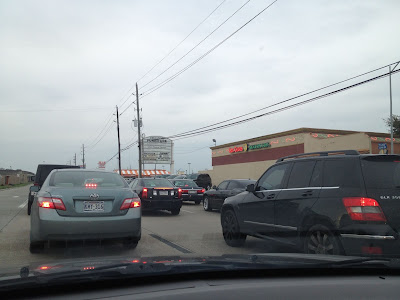 Taken by author facing west at Jones Road and 290
At this point, the east side of the highway crosses into the inner enclave of Jersey Village, while the west side remains industrial. The extension of Jones Road blasts through some trees to FM 529, this was completed circa 2011 and added a railroad crossing for the first time. It is a constantly busy intersection (it provides an alternative to getting to FM 529 without using the frontage roads and vice versa) and I've dealt with this one twice. The first time, I made the mistake of getting off at Jones when I was trying to go to Hempstead Road a few months ago on a road trip, and the light was the longest I remember sitting through in a long time. The second time, I got off at FM 529 on a wrong turn and had to sit in line to get out (a train was waiting too, even). It wasn't until late 2018 when it finally proved useful by providing a way to get back on the freeway (and the Beltway ramps) from FM 529, saving at least three stoplights. As of April 2019, a new development called Village Center will be developed around the extension.

Eastbound (South)
12010 Taylor Road - Gulf Pacific Rice Company (aka Sarita Rice or Gulf Rice Milling), a rice milling operation here since 1954 and built by the Moore family as a rice dryer (the grandson of the original builder still has a role at the plant!). Unfortunately, my pictures of the rice mill (Gulf Pacific since '89, when the company was founded) aren't that good. Gulf Pac has dozens of clients (even big ones like Udi's and Kelloggs) and makes most of the bagged store brand rice (not just H-E-B, but even farther away chains like Hy-Vee, and there isn't a Hy-Vee in probably a thousand miles) since switching to domestic production in the 1990s. There's trucks going in and out all the time (most of the rice is grown in Arkansas area). Gulf Pacific also has Taylor Laboratories at their address, which is an in-house testing lab for QA and testing. I visited this plant, I should know (but they never called back about the job they said they were going to offer me, a pity). There used to be a billboard for "Perry Pools" that's been there as long as I can remember, though it was torn down in 2015. I'm guessing it was torn down for the frontage road rebuild. You can see it in WHA, Google Street View, or a YouTube video I made entitled "Northwest Free" to see it though! At some point in the early 2010s, they replaced the static Gulf Pacific logo (facing south) with an LED board advertising Sarita Rice and occasionally other advertisements (job openings, employee of the month, their Twitter handle).

7935 Wright Road - Tuff Shed moved here in 2013, and features a sign that blinks rapidly (deliberately). has created a sign that blinks rapidly. It shares the address with "A Discount Storage" (or "A Discount Mini Storage") and Two Men and a Truck (a business-within-a-business at the self storage place). Tuff Shed's place prior to 2013 used to be "Houston RV Center".

7938 Wright Road - This one's a bit of a tragedy. Sparkle Sign Company was one of my favorites, for years, you could see all sorts of old signs in the back (including an old McDonald's sign), probably other treasures as well. This I also don't have a great picture for. I don't know how much stuff is in their "sign graveyard", but I would sure to see it. Unfortunately, they don't offer tours to the general public, and in summer 2018, rebranded to Signco America, presumably as part of a buyout. This not only removed all the unique and colorful signs on the 290 side of the building but even seemed to clean up the "sign graveyard", for the first time, I don't think I saw the McDonald's sign. Was it, and others, destroyed? From October 2015, here's a night shot (regrettably very blurry) of all the signs in action. Here's a bonus picture, of a Landry's sign visible from Wright Road, taken earlier that year.

11310 Charles Road - It's unlikely you can see Weikel's Woodworks Inc. from the freeway, it's behind another business on Charles Road, but it makes cabinets.

11280 Charles Road - During most evenings and afternoons you can get a good view of Arsham Scrap Metal Inc. as the traffic tends to clog up right outside of it. Here's a 2013 view from my filming attempt, but it was repainted in late 2014. Here's another picture from January 2016.

17504 - The northwest corner includes a small strip with a Starbucks Coffee and for a period of at least seven years had a "Philly Connection" cheesesteak place (still around in 2015, but I'm sure there were at least two others along the 290 route in 2007-2009), and word is on HAIF that the plaza used to be one of the "unmanned gas stations" with no store and no attendant. It was a Shell, though because it was demolished in 2003, I don't remember it.

17438 - The Exxon here at the corner of Jones Road and 290 was originally not branded as a convenience store brand but by the early 2010s gained the Timewise brand a few years before it had to go for freeway widening. The Exxon sign was covered with a tarp for months before re-emerging with a new logo on the rebuilt station. The new slightly downsized lot featured a new Timewise convenience store but a permanent casualty was a drive-through car wash.

17430 - The Chick-fil-A is a small building by Chick-fil-A standards (somewhat unusual layout, no playground) and replaced a building of the strip center containing a Subway, ACE Cash Express, and a few other tenants. The whole building was 17430, suites A through F. (Subway was suite F). The original building was demolished due to freeway widening.

17390 - Exclusive Furniture started as Handy Dan Home Improvement but it moved out before the end of the 1980s. Exclusive Furniture closed in 2018 around the same time (though I think they overlapped) the Cypress location opened. For years I thought it might have been a supermarket at some point, but that didn't make sense if the Randalls was the main anchor.

17386 - Los Cucos Mexican Cafe was a Monterey House back in 1989 and became a Monterey's Tex-Mex Cafe soon after. No other information is available.

17340 - Hartz Chicken Buffet was a Tinsley's Chicken & Rolls back in the 1980s, one of its last locations in the area before leaving town. It became Hartz sometime around 2008 (as of late 2007 it was recently-closed independent shop Burger Depot). Interestingly, I can't find what it was in 1990, as it wasn't Tinsley's, Hartz, or Church's. It may have been vacant afterward.

17342 - Super K Food Mart (with Valero branding) was here, having converted from a Diamond Shamrock with Stop N Go (it's unknown as to why the convenience store went independent as opposed to converting to a Corner Store, as almost all of the others did). It did end up closing due to the freeway construction in 2018 but it rebuilt as a Shell with a new convenience store (Fuel Time) with a new fuel canopy between it and Hartz.

17100 - This property was used as a location of Houston Garden Centers in the late 1990s and much of the 2000s (link) but archived searches say it's for Houston Plants & Garden rather than Houston Garden Centers, which seems more likely given a different sign and the lack of HGC's characteristic red and yellow striping. In 2017, work began on the site for Superior Subaru of Houston.

16518 Jersey Drive - What was Jersey Village Baptist Church for a number of years uses a side street as a main address instead of Northwest Freeway, since originally it was a small church at the corner of Jersey Drive and Rio Grande Street. Only around 2003 did it add a large parking lot and facade off of the freeway and in 2008 the new sanctuary building was built. According to Southern Baptist Convention's records the church was founded in 1955, but in 1953 Jersey Village hadn't even begun building the streets yet. In 2016, it became part of Champion Forest Baptist Church, and soon renamed to "Champion Forest Baptist Church - Jersey Village".

16822 - Today a Taqueria Arandas, this was originally a Kettle, and closed sometime in or after 1994. By 2003 TA had taken over. Sometime around late 2014 or early 2015, the facade of the restaurant was demolished and rebuilt so the restaurant could survive the widening. This made it look less like the Kettle.