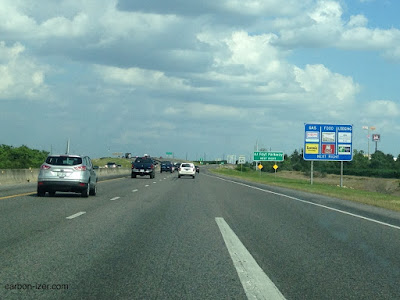 I know that as of this writing the exit is closed (well it was as of early February) but this intersection has become a common stop. When I was doing interviews in Houston (and later living in Houston, if briefly) the Jack in the Box was a common stop here. Most notably is a huge Exxon sign advertising Exxon and Popeyes (the Popeyes sign finally changed to an updated logo, which was a bit disappointing as far as familiarity goes) and then the Domino's Pizza (the diamond-shaped logo) below that. The businesses are off of Stokes Road, which may have been intended as a frontage road at one time but is a separate access road.

The eastbound businesses are as follows:
CVS/pharmacy (31013 FM 2920) moved from a strip mall location circa 2005 that was only briefly a CVS (virtually all CVS stores in Texas prior to 2004 were Eckerd drug stores) down the road to this location. I've stopped here at least once. It probably doesn't see as much freeway-side traffic as the fast foods and gas station does, but it serves a purpose for those things drug stores have that convenience stores don't (hey, I stopped there once), and it serves local Waller interests as well. It isn't very busy.

Jack in the Box (31014 FM 2920) used to be my Dad's stop when heading down to Houston and later was adopted by me. The first time I actually remember going in to the store was as far back as 2009, when they were advertising the HangInThereJack campaign, which would ultimately result in altering the logo of Jack in the Box, and within a few years that would sweep the chain. I don't know about the logo change, to be honest, it took me a few more years to get to used to it, but this is one of the places I always stop these days. On the wall it mentions what its first year was but for some reason I don't have that recorded here.

Exxon (31100 FM 2920), as aforementioned, is actually in a large plaza featuring a Subway, Sakura Nail Spa, and a local doughnut place called Donuts Delight. Popeyes is there too, but it's not connected to the inside of the convenience store, Town & Country Market. I have one shot of the gas signage when gas prices began to go down around late 2014 (January 2015 picture), though on my iPhone, reds display as oranges. I'd have to say that the gas station (minus Subway, which was built later...probably why it lacks co-billing with Exxon) probably came in-line in the late 1990s, though don't quote me on that.

In previous versions of this page, I stated that "none of the food establishments are accessible from inside the convenience store", but that's not true, it actually does have a Domino's inside, but it's just a counter inside the store.

Shipley Do-Nuts (19757 Stokes Road) opened around 2013 or 2012, and is the furthest from the highway access. I stopped here once in early 2015 as a day trip and got an apple fritter. Since then I've dropped by once or twice for a donut. It's closed from mid-day on, so if you want a donut, get here early.

Americas Best Value Inn (19777 Stokes Road) is also slightly newer (new being a relative term); it appears to have been built in 2005. (This is an addition to the blog, it wasn't covered in the original page)

Just a bit farther (past the entrance) is the Walker Veterinary Hospital (38111 US-290), it seems to share the original rectangular plot of land US-290 cuts through and Topper's Camper Center (see our next page) shares.

On the westbound side sits just one business, the Love's Travel Center (30710 FM 2920), which has an Arby's inside. I've been here a few times but I rarely stop at it (usually prefer Buc-ee's). As a truck stop, its merchandise mix is a bit more interesting than the usual convenience store fare, but the restrooms aren't that great, the prices aren't that great, and I don't really care for Arby's as a fast food option (probably why they seem to have closed a lot of locations in the last few years). It can be seen on the left side of the distant shot looking toward the Exxon.

<< Back to Fields Store Road