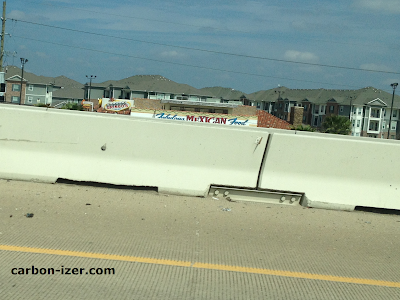 Hey! It's hard to take a picture of a westbound business from the eastbound highway!
Just a decade ago Mueschke Road (I'm not sure on the pronunciation, is it "mush-key"?) was a small two-lane road with...nothing, the first building being a church near the creek and then a Buc-ee's gas station with a car wash. The store isn't nearly as large as the one in Waller but it has fudge, Beaver Nuggets, and clean restrooms. This page is all westbound businesses but written from an eastbound perspective, that is, it starts west and goes east. This is because I wrote this from an eastbound perspective.

Westbound (North)
27240 - Fairfield Baptist Church. Predating everything else in this stretch, this church was completed in August 1995 shortly after the Google Maps aerial was done. It later expanded with a larger sanctuary in the early 2010s after building a second building in the mid-2000s. For over 10 years since its original opening, it was the only thing on Northwest Freeway until Cypress Chase Boulevard had it not been for...
27236 - ...Metro Mini Storage, which opened in the early 2000s. This is the more "traditional" self-storage place with drive-up garage doors. It has expanded over the years.
27214 - Public Storage opened in 2017, the same year as the extension of East Louetta Road to the freeway. Despite Louetta Road going (in theory) to I-45, the road abruptly ends at Northwest Freeway with just a right-turn only lane. PS is more of what self-storage buildings look like in the inner loop, a big boxy building with no windows.
27200 - Another strip mall that was built in 2016 and quickly populated. While I haven't investigated it thoroughly (not enough car rides with me as passenger) it has The Little Gym, Yokohamaya Japanese Restaurant, and Imperial Vapor Company, possibly others.
27150 - A strip mall is here, anchored by Fairfield OB/GYN (seems it had its sign up for several months before opening around April 2016) and Nikko Dermatology (on the opposite end, also opened 2016). There is also "Medi Pro International Pharmacy", which opened 2017 (likely).
27140 - Goodwill Select Store opened January 2016. This replaced the donations-only storefront closer to Fry Road.
27130 - La Quinta Inn & Suites (badged as simply La Quinta) seems to have opened in 2016 based on real cars in the parking lot.
27210 - Christian Brothers Automotive. Based on aerials, this either opened late 2012 or early 2013. (I know that the addresses seem out of order, but they're listed chronologically as they appear north to south)
27126 - Two tenants were originally in this strip mall (opened 2011): Lucky's Pub and "Cy-Fair Emergency & Imaging Center at 290 & Mueschke 24-Hour Emergency Care", one of these private "emergency rooms" that have been cropping up everywhere. It actually ended up closing early 2017 if the lack of Facebook updates is any indication and soon after Lucky's filed out of this location, replaced by Floyd's Cajun Seafood.
27130 - La Quinta Inn & Suites (badged as simply La Quinta) seems to have opened in 2016 based on real cars in the parking lot.
27106 - Buc-ee's opened late 2008. This is perhaps (one of) the last "traditional sized" Buc-ee's ever built. It has a car wash.
14201 Mueschke Road - Waffle House opened c. October 2015, behind Buc-ee's.
27104 - 2013-constructed strip mall with a few tenants including Universal Smiles and Texas Mesquite Grill.
14102 Mueschke Road - Crossing Mueschke Road, which completed a major rehab (four lanes and even a slight re-alignment near NW Freeway done in 2009), Mo's Irish Pub was the third restaurant built in the "restaurant row". Opened late 2015. It looks like they have a tree permanently covered in Christmas lights, which change colors at night (or at least how it appeared on a Friday night in April). It's attached to a strip mall which we won't cover in this website.
27030 - Gringo's Mexican Kitchen, the first in the restaurant row at the northeast corner of Mueschke and NW Freeway, opened in October 2011. The picture of it above is from me, March 2014.
27040 - Cracker Barrel opened by late 2014. Like many of its restaurants, it is on the highway.

<< Back to Mason Road
>> Next Exit: Cypress-Rosehill Road / Fry Road and Spring Cypress Road
Posted by Pseudo3D at 9:41 AM