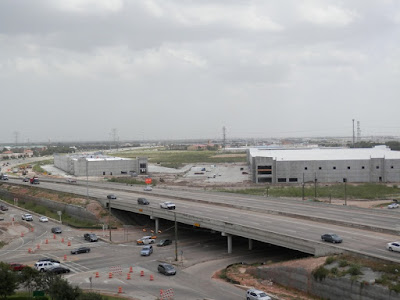 As we approach Huffmeister, we see the large North Cypress Medical Center, which contains some medical offices on the lower level of its parking garage, mostly medical tenants with (at least) one notable exception: a Spanish-Italian restaurant called Merche! on the lower level. The construction of the hospital made the area much busier and much more urban feeling. It was also here where we were in the HOV lane (spring 2012, before construction) and got into a pinch when a motorcycle was stalled in the HOV lane (and luckily, it was the part that had been restriped and not the "concrete canyon" later on). Some honking, and we got out (hopefully that motorcyclist got out okay). (This is why HOV lanes need to be two lanes wide by default). This section will include everything from Ladino Road to a large power line right of way located between Huffmeister and FM 1960.

Eastbound (South)
There was nothing here for years, just the frontage road splitting away from Hempstead Road, intersecting with Huffmeister, and then merging directly back onto 290, with only a huge swath of trees survived until 2013, when it was torn out for a business park (and an Exxon)...or was there? One of my references cites "Texas Tee Golf Course" at "20454 Northwest Freeway" listed near Hampton Inn, and while the address doesn't really work, replacing Northwest Freeway with Hempstead Road does, and indeed, there is a small golf course there in 1995. At some point this closed and it became overgrown.


20621 - Exxon with Timewise. Possibly the last Exxon I've seen built new that has the full capital EXXON lettering and blue stripe under the logo before they switched to lower case lettering akin to the full ExxonMobil logo.

20710 Hempstead Road - One of the three large buildings that compose the business park, McKesson is a medical supply distributor.

21208-21214 - The North Cypress Medical Center at 21214 with a few medical offices adjacent. Of note was Merche!, an Italian-Mexican restaurant that closed a few years ago (even if the signage remains). It operated in the lower level of 21208 (parking above) from December 2009 to sometime around 2017.


20600 - Exxon with Timewise, something not uncommon along the 290 corridor, and not even unique to Northwest Freeway and Huffmeister. The gas station was one of the earliest buildings at the intersection, dating back to 1999, but as of 2005 it was an On the Run gas station. (Most of the On the Run stores were sold to Star Stop, but this one became a Timewise presumably before that).

20432 - Top Dog Fireworks Warehouse, formerly Black Cat Fireworks Warehouse until the mid-2000s, is here. Not only does a giant fireworks warehouse behind a subdivision sounds like a horrifyingly bad idea, you can't even possess fireworks in the area. It had to be grandfathered in, obviously. During the Halloween season, it becomes orange and becomes a large Halloween store.