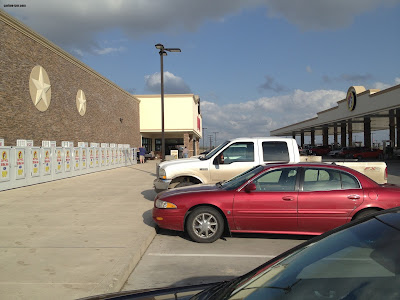 Buc-ee's is hard to capture because it's so large (looking east in March 2015).

I've always felt that the FM 362 overpass (heading eastbound) goes way too high with sharp dropoffs before adding guardrails at the very top (at least they have shoulders), moreso than other overpasses in this part of 290.


=Eastbound (South)=
20727 FM 362 - Waller County Line BBQ, a large Exxon (as of summer/early fall 2019, formerly a Shell) station, this was slightly expanded (based on roof and pavement color differences) in the time span between 1995 and 2003. They have survived the arrival of the beaver's gas station, but I can't imagine they were very happy about it. This is a picture from February 2014 of Waller County Line BBQ from the highway (sorry for the quality). The address is also home of Cedar Creek Saloon, which does not connect with the convenience store/restaurant portion of the gas station. This is your typical smoky poorly-lit honky-tonk with pool and cheap beer.

=Westbound (North)=
40900 - Once Buc-ee's opened, it quickly became a near-regular stop on the highway. Based on what I can find, it appears to have opened in late 2013, though I swear I remember it opening earlier that year (just a little). It advertises (at least until it became common knowledge, or I could be just getting used to it) even on Highway 6 South as "Waller You Waiting For?" I love this store and has become a regular stop in returning on the 290 corridor. At least three times (as of last time I kept count, which was a while back) I have eaten here for their awesome club sandwiches and in-house potato chips, though I gotta admit, I've had a number of "bad chips" (almost consistently per package) where it somehow doesn't get cooked properly and ends up having the texture of folded paper. It was definitely disconcerting for the first time, because I couldn't see them while eating. True story: I remember actually exiting the highway to try to spit out what I thought I was a napkin I had accidentally ingested. I have a few pictures of this Buc-ee's, but not from the highway. Buc-ee's is hard to capture because it's so large (looking east in March 2015). Here's another picture looking back at the beaver statue to the west (also in March 2015).

Swamp Shak (20797 FM 362) - The Swamp Shak seafood restaurant appeared sometime in early 2015, though a Yelp review seems to indicate they've been active since April 2014. Normal activity stopped around 2016 (the Facebook page confirms this), though current signage on the restaurant (defunct) indicates its used as a fireworks stand seasonally.