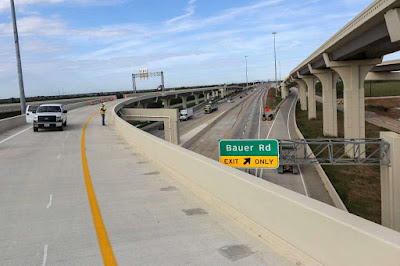 No picture available, so we'll have to use one from the Houston Chronicle.
From some pillars in December 2011 to a huge interchange just two years later, this has long plagued 290 with concrete barriers, temporary lane markings, zero-distance merging lanes, and more (though it's gotten better). And it's not even a five-stack like they promised, which is hopeful in some ways as there are a number of bad designs around TxDOT projects that need to be substantially altered. This creates a major dividing point in the US-290 story and rather than a "creeping approach of suburbia" creates a physical divider in the landscape. The Grand Parkway opened in December 2013 southbound to Katy and the northern segment, connecting to Interstate 45 and The Woodlands, opened in early February 2016. To be fair, the five-stack would've required the frontage roads to be sunken or elevated over the railroad, and flooding was a big problem for the pre-rebuild Beltway 8/I-10 overpass. There's no addresses here because the exits only go to Grand Parkway and not the frontage road.

<< Back to Becker Road