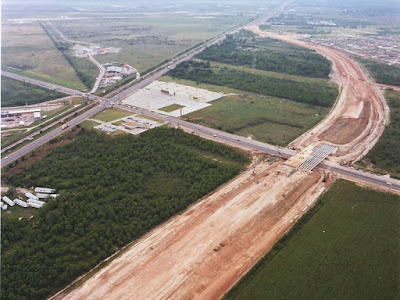 From Texas State Archives via Houston Freeways
If you want to read more about this road, I should note that a lot of this is covered over at West Houston Archives, a site which I love, links to this one, and one that I deliberately try to not overlap (for buildings near this intersection, visit the SH-6/Addicks-Satsuma section), even if it regrettably no longer updates. This section covers from the power line right of way to the north and to a second power line right of way right where Hempstead Road re-joins again.

Eastbound (South)
As the frontage road wasn't continuous until the 290 rebuild starting in the early 2010s, the first business at this intersection is a Hampton Inn.

13250 FM 1960 - The Shell is branded "Select" which I believe is an in-house brand used on a (very) "Select" number of stations. One of those conversations I've had with family members is as follows: "Oh! It's a Shell with a 'Select' gas station. I remember I had a LEGO gas station with that brand as the convenience store...or at least really wanting it," as I realized I never actually owned it.

19865-19841 - The strip center here has seen a variety of tenants. The Subway at the north end (19865, just behind the Starbucks) closed May 2016, with the restaurant on the south end going from Kim Kim Vietnamese Cuisine to eT Craft Burgers & Beer to currently a seafood restaurant named "The Catch". Mattress One was formerly Busy Body, a home fitness equipment retailer, and a Subway was here until around May 2015.

19811 - There were many other restaurants in this section built over the years, but the last one to be built to my knowledge was 2015's Harris County Smokehouse. It moved from an old Kettle located in front of the La Quinta Inn (behind the Hampton and the Shell).

19820 Hempstead Hwy. - The first Gander Mountain store in Houston opened in October 2004 (link) and closed in spring 2017. It never had direct access to the Northwest Freeway frontage road since it didn't exist at the time (you had to use the driveway between Chili's and Applebee's, then use the parking lot access roads). In late 2016, this was fixed with the construction of a new continuous frontage road but it didn't help Gander Mountain's fortunes much.


Eastbound (South)
20102 - Goode Company BBQ was built around 2008. Despite the development of the FM 1960, most of the northeast corner still remains fairly undeveloped (though this, of course, is changing).

13155 FM 1960 West - The southeast corner was a Chevron for years (it rebuilt around 2007 with a full "Speedy Stop" instead of its under-the-canopy "Food Mart"). I believed for months that the Speedy Stop would be converting to TETCO or 7-Eleven due to 7-Eleven acquiring most of their stores, but this store wasn't one of them. Instead, by December 2014, the Speedy Stop was still there, but Mobil took over the station. You can see the station in its original form here (at WHA, of course).

13145 FM 1960 West - Until I traversed the FM 1960 corridor to Willowbrook Mall in January 2017, I had little experience of FM 1960. I remember stopping at the McDonald's (for coffee and snacks) en route to the Houston Museum of Natural Science in 2008. I remember commenting on the incredible shrinking apple pie (and why they were so cheap). It was also one of the first "new-style" yellow-eyebrow McDonald's before they started to rapidly tear down or renovate older "mansard roofs" en masse.

19630 - The new Baker Nissan North opened here in 2013, replacing Champion Lincoln Mercury Isuzu, and moving from a location further down the street.

Just south of Luby's is a row of car dealerships, which define 290 for the next mile. Before the recession (and an ordinance that largely phased them out), there were usually giant balloon structures on top of these dealerships. Only one actually closed, Jim Archer Chrysler Jeep, but that's described in the next section...

The FM 1960 interchange was particularly nasty in January 2015 because I exited there out of panic from a crash ahead--and then found out that there was no way to get back onto the highway safely, because both the southbound entrance ramp and southbound Hempstead Road (which at least used to become the new SB frontage road) were both closed. It's still a disaster area, and it's not getting any better.

As of this writing, they're building an even bigger overpass over 290 which is higher than the elevation the FM 1960 bridge goes over the railroad.


<< Back to Huffmeister Road
>> Next Exit: North Eldridge Parkway and West Road