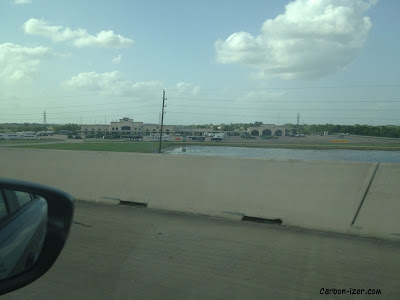 We're getting closer to the Grand Parkway.
The Eastbound (South) side features a large concrete plant, Hanson Aggregates of Hockley (16910 Katy-Hockley Rd.) featuring a large, circular railroad spur (since it loops, it can't accurately be called a spur now, can it?) though right near it is an abandoned ROW that led out to a salt mine (which still exists).

The Northbound side has a large stone building (33400 U.S. Highway 290) that is currently home to "Sutong Tire Resources Inc." and originally opened as D&D Farm & Ranch Supermarket in 2001, which was billed as the world's largest western store upon opening and sold upscale western-inspired clothing, many of which consisted of, and I quote, "music-star jeans". The store also sold actual farm-related equipment including saddles, fencing, and home furnishings (but no food, ironically). D&D eventually moved on (it appears to be in Seguin now). By November 2005, the space reopened as Sergeant's Western World, which was in many ways more of the same but focused more on horse equipment and custom saddlery, with Western apparel and everything else following behind. I remember passing by Sergeant's in January 2009, when it was going out of business. It was replaced by Foster's Farm & Equipment store soon after. Foster's remained until sometime in late 2015 and was superseded by its next-door neighbor, Brookside Equipment Sales, with Sutong appearing by December 2016.

<< Back to Betka Road / Badtke Road