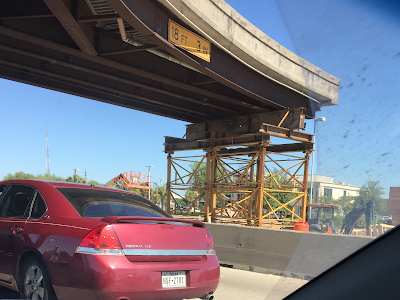 The ramp to the Park & Ride being rebuilt in spring 2018, a bit nerve-wracking since this was a similar setup to a recent fatal bridge collapse in Florida...
During those magical years when I was driving on 290 semi-regularly but not yet driving myself (thus, allowing me to actually look out the windows and observe things going on, without missing half of them), this was one of the main modern sections along 290 with car dealerships, and later when 290 construction began was one of the first parts of the freeway that was completed with smooth concrete (yet still a bit bumpy due to a joint issue). While the car dealerships started to de-populate in 2009, one thing that I do fondly remember was all the giant inflatables they had (gorillas, the like), which I then read how a city ordinance would ban them. And sure enough, they all disappeared! This section covers the power line right of way (or where Hempstead Road rejoins the highway) to Steeple Way Boulevard.

Eastbound (South)
19191 Hempstead Highway - There's the large warehouse of SPX Flow Technology here...This actually has no access from 290 anymore, it now requires entrance through the back. For years, it had a driveway connected to the frontage road (and the railroad crossing was equipped with lights and gates, no "crossbucks only" here) but in 2015, the crossing closed when the frontage road did and never reopened. The gates were removed, but the rest of the infrastructure is still there. Apparently the SPX Flow division separated from the parent company as an independent company in 2015.

8660 N. Eldridge Pkwy - One of the warehouses of Silver Eagle Distributors is here.

18777 - After the West Road interchange was the sign for Phobia Haunted Houses, which supposedly moved after the 2013 season, but ended up being open for 2014. My August 2013 picture (from a video) isn't all that great, but it shows the sign (on the property, not in the 290 right of way), lots of trees, and the dirt road railroad crossing you have to maneuver to get in there with no gate whatsoever. I imagine that if you did go, a train surprising you at that point may be the scariest thing you saw that evening. Hopefully no one's gotten hurt there. WHA points out that this was based around an actual old house. By December 2014, the sign was gone, replaced by a "Clown Moving Co." which can only be seen seasonally (due to foliage overgrowth) or if you were looking for it. As of October 2015, there's a billboard redirecting people to their new location off of Beltway 8. The railroad crossing is closed and the buildings have been completely demolished. Pre-construction, this was one of the areas where you could clearly see the US-290 metered ramps (which I never saw operate).

Westbound (North)
19300 - Hub Hyundai Mitsubishi, also known as Hub Hyundai or Hub Mitsubishi depending on the section of the car dealership, is one of the oldest dealerships in the area, dating back to 1986. Unverified information says that this was once the home of Hub Buick, which had been at the corner of Westheimer and Kirby many years ago.

19200 - This is home to Emerson Process Management (Valve Automation division), which was formerly the home to Jim Archer Chrysler Jeep, built around 2004 but closed about five years later owing to a downturn in the automotive business. The current business (built 2012) demolished just about everything except for a few parts of the parking lot.

19010 - Joe Myers Toyota absorbed 19100 (Baker Nissan North) after it moved in 2013 and built new facilities there. The other two buildings on site were once two different car dealerships but they were merged at some point in the past.

18900 - Lone Star Chevrolet built here starting around 1999. Curiously, there was also a gas station complete with a car wash at the corner of Eldridge and Northwest Freeway (northeast side) that was built after 1995 but disappeared by 2004, and my records don't have it. Most of the parking lot for the gas station was recycled for the car dealership's expansion (paving where the car wash, pumps, and convenience store were, and removing the driveways to Northwest Freeway and Eldridge). The next door over, "Lone Star Preowned", is also an extension of Lone Star Chevrolet, but it may have been another car dealership originally, as it is across another street.

18700 - Sterling McCall Collision of Jersey Village sits on the other side of West Road. This used to be a Saturn of Houston dealership before around 2009.

18670 - Altex Computers & Electronics is here, built in 2000, an electronics store similar to Fry's Electronics or Micro Center. I personally have never been, as it was farther away from either when I've lived in Houston, and it's smaller than either of them.

18550 - A lonely Popeyes Louisiana Kitchen sits by itself, built in 2001, but it has remained in business. Beyond this is the HOV connecting ramp to the Northwest Park & Ride (not to be confused with the Northwest Transit Center), a bank, Bobcat of Houston, and a self-storage business.