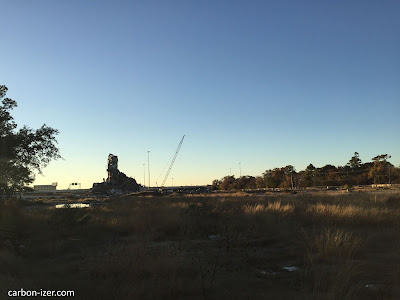 Without the Brookhollow buildings (taken here in December 2017, from Dacoma), 290 isn't the same.

As 290 essentially splits here as it ends going different directions, this covers the eastbound section to the railroad and the westbound section to Directors Row Street (the eastern terminus) and starts from the power line right of way just south of Kingswood Lane. Like some of the other sections, this section is abbreviated, it does not go into detail on the small industrial buildings in the area nor the Delmar-Dyers sports complex.

Eastbound (South)
10515 - The now-defunct Monterey's Little Mexico closed in summer 2013, though recently the building has been dramatically altered. You can see the now defunct Monterey's here: the big sign is still up as of November 2015 (visible from the new ramp, even to this day). Looks like it closed in summer 2013. The location dates back to the 1970s as Monterey House, probably before the area was developed mostly as warehouses.

Interestingly, this was the restaurant pictured when Houston Chronicle discussed the changeover from Monterey House to Monterey's Tex-Mex, and the 1989 incarnation of this restaurant looks far better than the modern restaurant. Why a renovation would make the restaurant look older and overall worse than the later incarnation. (Thanks to Mike from Houston Historic Retail for the original scan).

10375 - Despite the modest restaurant-esque architecture, Lone Star Children's Medical Clinic was "MedStop" back in 1981, which was an "ambulatory care facility" for general medical care and minor emergencies, a bit like a prototype to these private "emergency rooms" popping up everywhere.

2425 Mangum Road - This strip club, Sunset Strip, was once a Steak and Ale restaurant, closed in 2008 with the rest of the chain. The club appears to have opened in 2012.

2416 Mangum Road - This was an Exxon but by 2001 was already closed and leveled, with new construction commencing by 2007 and the old rectangular sign frame still remaining intact. The new 2008 tenants included Nick's Grill (originally named Niko's Grill until local chain Niko Niko's forced a name change) and Insurance Superstore LLC. Unfortunately, it seemed to open at the wrong time, as a new elevated freeway ramp was built right in front of it (as this summer 2013 picture demonstrates). From what I read, the highway construction has caused enormous losses for Nick's (an early 2014 article indicated it wasn't turning a profit, with the owner was investing lots of money to keep it open). Coupled with the mediocre Yelp reviews, I felt it was a goner for sure, but for whatever reason it remains open to this day.

4401 West 18th Street - This combined Shell/Burger King was built in late 2007 to replace an older gas station. By the time it was built, Burger King had long since fled the space where Pizza Inn occupies (see below).

9500 Hempstead Road - The Northwest Mall I did visit once, covered in this section here. By the time I first really started paying attention to Northwest Mall (rather unimpressive, as JCPenney had been gone for years, and only Foley's was left) it was deep in decline. The Foley's would become Macy's in 2006 and close down in 2008 following Hurricane Ike damage (probably an easy way out since the 2003 opening of the Galleria's Foley's rendered it irrelevant). The sign still hung on the building for several years afterward even as it was clear that Macy's would not reopen it.

9552 Hempstead Road - Anchoring one end of a small shopping center facing Northwest Mall was Demeri's Bar-B-Q, though the tiny building at the corner of Hempstead Road and Loop 610 was nearly invisible from the freeway. Googling helped find these, but it appears that not all of them were actually active (must have switched addresses). A * means that I've confirmed they were active or recently departed at the time the center was evicted (all had the address of Hempstead Road).
9552 - Demeri's Bar-B-Q*
9554 - Space City Tattoo Parlor & Body Piercing*
9556 - MP Healthcare Medical Supply [looked long abandoned by the time center was torn down]
9558 - [unknown, looks like there was a for lease sign]
9560 - Soundwaves [store #8]
9562 - King Street Patriots
9564 - Southern Apache Museum
9566 - Barber Shop & Beauty
9568 - Americana Insurance*
9570 - Smoke Toys*
9572 - The Security Store [address is also Townsley Baugh Design]

9550 Hempstead Road - This was American Wheel & Tire, a stand-alone shop, which was also torn down. Historically (1974-1989) it was a Wolfe Nursery location. During most of the 1990s it was "The Executive" (some sort of strip club, "private nude modeling", "Playmates appearing") but by 2003 it had assumed its last tenant.

Westbound (North)
10700 - This low-rise 1980s-era building wasn't that lucky in terms of freeway demolitions and demolished around December 2012 or January 2013. Here's a picture I saved from Loopnet.

10510 - On the other side of what is now Keystone 290 sits what was once Chili's. By 2014, MX Bar & Grill had come and gone, with 2017 briefly having Pinch Seafood Restaurant, the current tenant as of this writing is Mariscos Yucatan (also known as Yucatan Seafood & Bar.

10450 - A McDonald's has been here since around 1988. In 2001 it rebuilt (featuring a Playplace) but a 2012 scrubbed that (along with the mansard roof), partially to make it better compatible with the reduced parking situation.

2701 Mangum - Pericos Mexican Cafe is here in a spot that was originally Kettle Restaurant and later Taqueria Arandas.

10404 - Northwest Shell mostly functioned as a garage and like the Shell at Katy Freeway and Hunters Creek (still there) and North Shepherd and I-45 (long gone) had the Shell sign on this tri-pointed "tiki torch" design structure. The gas station canopy was in the way of the highway and was torn down in 2012 as the gas station did. The main building remains vacant, and based on Google Street View, appeared to be mostly a garage. The gas station dated back to the mid-1970s (even as a Shell). 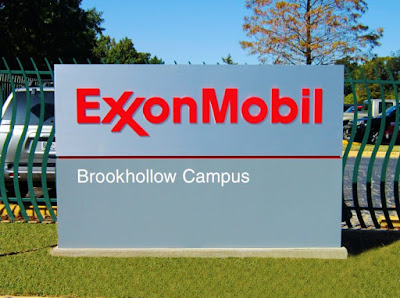 4400 Dacoma Road - In April 1969, Humble Oil & Refining Company purchased a 26 acre tract in the newly designated Brookhollow Business Park. From what I've been able to find, 4500 Dacoma was built first, along with a cafeteria (marked as "restaurant" in HCAD records) along with two smaller buildings further down Dacoma (as well as two smaller outbuildings), with a larger office tower (4550 Dacoma) built in 1976, by which time Humble had merged into its parent company Standard Oil of New Jersey to become Exxon. For nearly 40 years, the complex would be occupied by Exxon (later ExxonMobil after their merger with Virginia-based Mobil Corporation).
With the completion of the large ExxonMobil Springwoods Village complex built off near the corner of I-45 and TX-99 in spring 2015, the offices were vacated, and by fall 2016 demolition began on the entire campus. By late 2017, only one building remained, and soon after, three eerie main support structures among a pile of rubble.

3000 North Loop West - In the rest of the Brookhollow Business Park, all of the remaining office buildings survived, though a few lost their front parking lots. I have a picture I took from a 1970s book called "Houston Today" which shows a map and some of the earliest tenants of the business park (conspicuously missing is the Sheraton, which back in 1980s was a full-service Marriott hotel). Note that this scan appeared months before the book was re-discovered and completely scanned.The Sheraton Houston Brookhollow Hotel is more fully explored at The Houston Files.

Off the Freeway
2214 Mangum Road - The Mangum Road area down to West 18th is littered with corpses of chain restaurants and the things that replaced them. First up is this building, originally Hooters and Sakari Seafood Restaurant (Sakari Bar & Grill). After a period of vacancy, it is now Barneys Billiard Saloon #3.

2210 Mangum Road - This IHOP is now Jackie's Kitchen. According to my existing notes for former IHOP restaurants, this changed between 2010 and 2011 and is believed to just disconnected and kept the staff and menu).

2049 Mangum Road - This was an "old school" architecture Taco Bell even into 2007 (with the old logo) but it closed soon after and became a Subway (which destroyed most of Taco Bell's original architecture).

2009 Mangum Road - Curiously, this Long John Silver's is still intact with most of its architecture (but updated logo).

1915 Mangum Road - One of the first Del Taco restaurants in Houston (from 1978) and later Hartz Chicken Buffet. Today it's a Frank's Grill.

1815 Mangum Road - Just after Wendy's is the first new-build Checkers in town (from 2015), opening in a former Sonic.

3900 Dacoma Road - The office building at 3900 Dacoma was not part of the ExxonMobil complex, it was occupied by AT&T (a call center for credit and collections) even as late as 2016 but was demolished along with the Brookhollow campus anyway. In the early days (1973), it was occupied by Deluxe Check Printers. No newspaper mentions of 3900 Dacoma happen between 1973 and 2015, when major layoffs happened.

So that's the end of the 290 story. I hope you enjoyed it, and I hope you'll come back again when I do another round of updates and continue to expand on 290 and the things around it. To continue your "journey" in Houston freeways, explore Katy Freeway next, or visit Uptown.

<< Back to Antoine Drive and West 34th Street