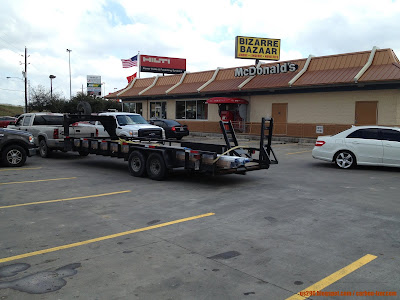 Golden Arches, but a copper roof. (2015 picture by author)

This section covers Northwest Freeway from the creek behind the bowling alley to Guhn Lane. Fairbanks North Houston is another long road, it becomes Blalock south of Hempstead Road, and Echo Lane south of Katy Freeway. To the north it goes all the way to Beltway 8 and under it, but it does not have dedicated entrance/exit ramps. All of the addresses listed are to the south side of the freeway (eastbound), the westbound only has two banks.

14225 - This opened in February 1994 as Homestead Village, a chain of extended-stay efficiency apartment hotels. In January 2001, it and others were sold to Accor, which converted them to Studio 6, which it still is today. It's worth noting that when they were converted, the Studio 6 logo was much flashier and interesting than it is today (see this 2005 picture from AARoads for an example).

14191 - Red Lobster opened their 13th area restaurant here in 1982, but by November 1995, it was closed (probably closed in part of a purge of underperforming restaurants when General Mills spun off their restaurant group). Larry's Bar-B-Q (Larry's Bar-B-Q Buffet) was open by 2003 but it would close in late 2016, and be replaced with Bombshells Restaurant & Bar, built on the exact same footprint (my guess is that Bombshells initially wanted to renovate but the extensive changes meant a rebuild instead). My picture of this restaurant (as Larry's) is found here.

14169 - Today this is a dessert place (La Monarca Michoacana) but back in 1993 it was Runaway Trains with model trains and model train accessories in HO, O, and N scale. It's part of Fairbanks Plaza (see below).

14147 - This has been a Jumping World for several years now (I can't find an exact opening, but evidence suggests 2013), but until 2008 or 2009 it used to be a Kroger. It used the block-lettering Kroger was known for in the early 2000s on, and received a facelift in the early 2000s that changed it from the distinct "greenhouse" it used to have. This did remain open even as Kroger had a store at West Little York a few exits up for a number of years. Even in its early days, this Kroger (according to a December 1981 ad) did not even have a full seafood department.

14101 - The Star Stop Exxon rebuilt around 2018. The rebuild featured a larger convenience store and an entrance to the back alley behind Fairbanks Plaza.

14099 - The McDonald's was built in 2007. Like many of the McDonald's built in this era (just before the "yellow eyebrow" stores). These two pictures (at the top and below) were taken in March 2015 (by me) but even in 2018 the store was renovated exterior-wise to the modern prototype. The picture below is when the sign was on the ground, but still about 7-9 feet. The sign construction was presumably when the Golden Arches were moved for highway construction. 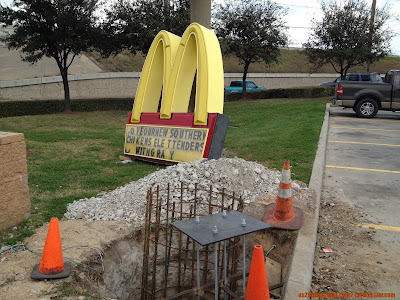 14085 - The Home Depot was built in 1999. This is connected to a strip center out front, which include Kolache Factory.

14041 - The InTown Suites Extended Stay was built in 1998. It only has one entrance/out point onto the frontage road, there's no connection to the (former) Cavender's to the east or the Home Depot to the west.

14045 - Just past this intersection was once one of my favorite signs along the highway, as there was a little neon cowboy on top of the Cavender's Boot City freeway side sign. However, a good night shot of the sign proved too elusive. I mean, this was the best I have (July 2014), but come on--that's supposed to be a vibrant red in real life, not orange! Part of the fault is that it's a screenshot of a video, but even my attempts at still photos with my iPhone have turned red neons orange. See my Torchy's Tacos article College Station/Bryan site for another example, or the "gas prices" photo above. Sadly, in December 2015, the sign was gone and the post was being dismantled. I believed that although there was a chance, it was just removed to be reassembled away from the freeway, it was highly unlikely. I took solace in the fact that there was at least a similar sign appears to be alive and well on the Gulf Freeway, hopefully safe from highway expansions for a while, plus a newer store in Victoria, Texas (which might have been the fate of the Houston sign). In terms of this building, HCAD says it was built in 1980 and an early 1980s directory says it was "Don's Western Wear". I thought somewhere down the line Cavender's bought them up, but in 1994 Cavender's was here but Don's still had Houston locations.

14031 - In 2016, a new Cavender's Boot City was built on the other side of Flintlock Road, with the new store being a 20,000 square foot store and being much larger and more modern. I had guessed that based on the architecture this was to be the case even before the name was put up, but the big surprise came around November 2016 when the Cavender's Boot City neon sign reappeared! I was elated, but it still doesn't seem to be 100% functional at night, nor does it seem to have the same color variety the old one did. I swear the gloves aren't even yellow.

14029 - Connected to the parking lot of Cavender's Boot City has been Palace Inn, a branch of Houston's notorious local hotel chain. Screengrab from my 2014 video HERE.

14045 - This had Just Brakes in the back and Carpet Mills of America in front. Later, Carpet Mills closed and was replaced by a mattress liquidator, and in 2015 both businesses closed. In 2016, the building was torn down. See the 2014 video screengrab here.

<< Back to West Little York Road and Gessner Road
>> Next Exit: Tidwell Road and Hollister Road