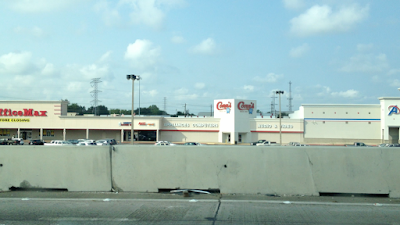 A 2013-era view of the Northway Shopping Center when OfficeMax was still in operation.
This section covers the area from the creek just north of Saxon Drive to the power line right of way south of Kingswood Lane. On the highway itself, this is also the new split for Interstate 10, opened sometime around 2015. Originally, US-290 ended at I-610 with a shuffle to get into I-10, but the direct ramps here changed that.

Eastbound (South)
11525 - The "old dead Chevron", as described in previous versions of this page was a Chevron because of its distinctive Chevron-shaped sign, though the "for sale" sign didn't appear until around late 2008. This one on this side of the highway closed around 2005. If you go to the page on HoustonFreeways.com regarding the 290 clearances page and scroll down toward the bottom of the page where it tells of the other Chevron that bit the dust, in the background you can see a white-looking sign with black text, that's this one. The Chevron also had an automatic car wash facility, which was razed around the same time. Less than six months before demolition, the black and white text was replaced with a colorized version. In this picture by me from May 2015, you can see the old dead Chevron from Antoine.

11321 - As of 1983, this was one of the original four Houston Patio & Garden Centers. In the late 1980s, Wolfe Nursery bought Houston Patio & Garden Centers and eventually rebranded it (after a non-compete agreement expired, the owner would form the modern Houston Garden Centers) and by 1992 this was a location of Wolfe Nursery, though by 1995 the garden center was closed. By early 1997, the property was serving as the Buff's Beach Bar restaurant, then by 2001 had become Manhattan Enterprises, a used car dealership. Sometime in the mid-2000s, the property was re-occupied by Houston Garden Centers and tore down a few buildings while bringing the property back to life (most of the back of the property wasn't utilized properly as a non-garden center). Oddly enough, this location did not appear on their website, but it operated from around 2005 to 2011. When the property was finally demolished around of November 2015, the building is being demolished, and you can see remnants of an office inside (a ceiling fan, a desk). However, prior to 2004, there was another building there different from the one recently demolished, so it served another purpose as a different business not related to vegetable plants and perennial flowers.

Last gasp of the Houston Garden Center - Picture taken May 2015.

11251 - At the northwest side is an empty office building, which was the home of HostGator.com LLC11251 Northwest Freeway) for less than a decade (the building was built in 1978). According to SpaceGhost over at Houston Historic Retail, 11251 (which initially contained HGC only on the fourth floor (moving from Florida in 2006), eventually slowly expanded throughout the building, only to leave by summer 2013 (a move to Austin was rumored in 2010, but they only established a presence there, and located elsewhere to Houston eventually). There's now a big "FOR LEASE" sign on the building now...

In this November 2015 picture, the entire building up for grabs.

11099 - Jojo's Restaurant was here as of 1979 with three other locations elsewhere in Houston (925 N. Wilcrest, 6415 Richmond, and 12010 East Freeway). By September 1997, the chain had six locations (including Galveston) in Houston but sometime soon after it was gone, with Denny's ultimately taking over most of the locations, with them moving to this location between 2002 and 2005.

11071 - The Academy Sports + Outdoors opened around 2004 in the former spot of Randalls #1 at the Deauville-developed Northway Shopping Center (though that had itself moved from a location at Mangum and 43rd fairly early on).

11051 - The Conn's HomePlus here was originally a smaller store next to an OfficeMax (11041 Northwest Freeway), as seen here in fall 2013, which is also the main picture of this section (as it was in the original HTML version of this page). After OfficeMax closed, it absorbed the space (along with Liberty Tax Service at 11047 Northwest Freeway) and Avis Rent a Car at 11049 Northwest Freeway) to create the large Conn's (picture taken November 2015), sealing the two in-line tenants and removing the Conn's "wedge" facade. However, the OfficeMax's sub-leasing to Avis and Liberty suggested a much larger tenant there at one time, and digging reveals that the space was originally a large Sage store, with Walgreens taking over the former drugs department when the chain closed around 1980-1981. What later became the Conn's was redeveloped by the mid-1990s (likely demolishing a section of the original Sage for the store), but right now, there's not a lot of information on the turnover of these spaces.

10999 - In the other "half" of Deauville Plaza, the Black-Eyed Pea remained here until it closed 11/27/15 (the chain functionally disappeared around a year later). It's now a location of Wings-N-Things, which moved from another restaurant building less than 300 feet away.

10903 - According to HAIFer "ldogg" was originally an Oshman's Sporting Goods, but my earliest memories involve a "Super Goodwill" (which was kind of visible on the sign until relatively recently...or it could've been "Goodwill Superstore"). It is now branded as a "Goodwill Select Store".


Eastbound (North)
11330 - HCAD's build date for this building says 1972, with the first tenant (according to a mid-1970s photograph and backed up with a directory), as "All Needz Rental". By April 1984, it was Freeman's Carpets & Interior, though a July 1984 posting also mentions a bankruptcy auction for Freeman's Piano Warehouse. By 1993, it was Maximum Discount Furniture, which eventually became Maximum Furniture. In 2013 it closed and from what I can tell was reborn on Richmond Avenue as "Houston Upholstery & Design". A house was also behind the building (pre-dating All Needz) on Milwee but it was demolished along with it.

11404 - This Chevron began life as a Gulf station back in the mid-1970s (complete with a very tall sign), and became Chevron after new ownership functionally retired the name in favor of their own. In 2013 the station closed down for redevelopment and was demolished the next year. In 2017, reusing the lot of Maximum Furniture next door and the house behind it, the station was rebuilt, with "Jack's Grocery" (a Chevron) opening by 2018. The newly built Chevron did not have a large sign like its predecessor.

11290 - Al's Formal Wear and Al's Tuxedo Outlet, which sat in the ROW in a triangular-shaped building, didn't survive ROW clearances and was one of the first freeway-related demolitions. Since I obviously didn't think about taking pictures because it was too late, there's a few Google Street View shots here and here.

11250 - Built sometime around 1973 as Romana Cafeteria (Luby's brand when entering Houston), this was later converted to Luby's Cafeteria (and eventually, just Luby's) as time went on. The Luby's corporate office has been shutting down stores left and right, so this may not survive for too much longer.

5330 West 34th Street - This Office Depot began life as Weingarten back in 1974. By 1985 (after Weingarten as a chain ceased to exist), Moore's Foods was operating in the spot. This mini-chain had two other locations, one at 301 West 11th Street (later an H-E-B Pantry before it was torn down for a bank) and at Rosenberg (the original store, evolved out of a Minimax). In 1988, Office Depot opened.

5264 West 34th Street - Originally, the end anchor was Kmart (#9646) and according to HAIFer "purpledevil", the Kmart never changed its original turquoise-and-red logo, though the building clearly expanded between 1989 and 1995 (which I would assume they DID change the logo), though by the late 1990s it would move out to a former Venture on 43rd Street. By late 2001, it was a new Randalls store, demolishing the building and making it closer to the original footprint. Furthermore, it also appears to have been one of the first Safeway-era locations but it was not really renovated to the Lifestyle format (except for a few design elements). Admittedly, I've never been to it, but it seems cold and lifeless even in the times it was still alive and well. In the spring of 2018 the store was closed, and was replaced (along with other recently-departed Randalls stores) with El Rancho Supermercado within months. It was not a total white-flag by new Randalls owner Albertsons despite what many have thought, and the fact that Albertsons owns 45% of El Rancho Supermercado indicates that it's a bit of a newer strategy.
11150 - Beyond West 34th, there's some clearances from the 290 widening, particularly Pleasures Mens Club which was demolished in January 2013 (or late December 2012). The strip club was GiGi's Cabaret originally, with the opening in 1986 as per ads. It likely did not replace anything, as in the late 1970s the land appeared to be a gas station. Today the space has been configured into 11160 Northwest Freeway, with that building holding a T-Mobile store.

The apartment complex suffered issues leading up to its official closure in November 1990 (transients moving into vacant apartments and starting fires), with (apparently) another fire happening after it was closed before the city tore it down in early 1992. A new building and parking lot (Pine Hollow Shopping Center, 5215 West 34th Street) was built soon after, and today 5201 West 34th Street is a building with Jimmy John's and a Verizon store (original tenant still unknown).

As the freeway construction did affect it, a part of the Pine Hollow Shopping Center that was torn down (RadioShack looks to be on the other side of it, at least, it was, it might have closed in the bankruptcy, though it was torn down either way). I took this Google Street View snapshot back when I was first assembling what would be this page some time ago (link to screenshot). Jason's Deli was also in this shopping center (5215 W 34th St Ste. A) before the rest of the building came down.

11020 - A Denny's was here in front of what was originally a La Quinta Inn (but of course), dating back to 1977. At some point in the early 2000s, however, it moved to a former Jojo's on the other side of the freeway (see that entry, above), and the restaurant served as a revolving door of other restaurants, first with Baytown Seafood Restaurant by January 2004 and later, Supreme Sandwiches before being evicted in 2012 and demolished in 2013. Here's a Google Maps Street View of Supreme Sandwiches prior to demolition.

10896 - Originally, Captain Benny's and an adjacent restaurant (see below) shared a parking lot, but the freeway widening took the front parking...and would affect the other restaurant too. Captain Benny's itself is in a distinctive boat-shaped building and used to be the Captain's Half Shell Oyster Bar, which used to be in Bryan too (as well as other locations in Houston).

10890 - This "other restaurant" was none other than a Taco Cabana, former Two Pesos. Of course, by the time the freeway widening actually happened, Taco Cabana had been closed and replaced with "Big Daddy's BBQ". While the building got a cheap repaint, they at least got a new sign. (Static GSV picture here).

10830 - Olive Garden ended up being almost directly on the frontage road after the clearances but still remained open.