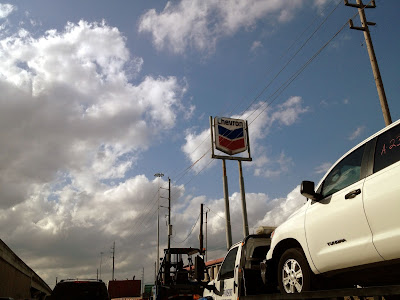 This is one of the biggest milestones along U.S. 290, with the enormous US-290/Beltway 8 five stack. This section covers the freeway from Charles Road (again, in theory, if it crossed the railroad) up to the Little York Park & Ride ramp.

It's not that obvious from the freeway, but to get to FM 529's entrance, which has a railroad underpass, the eastbound frontage road dips down to below street level, with the section of FM 529 under the freeway going down also while being under the freeway.

Senate Avenue is just right before the Beltway, in fact, prior to late 2014, Senate Avenue just straight became the frontage roads to the Sam Houston Tollway southbound, continuous for most of the loop until the sunken part near Memorial Drive.

It may be hard to believe, but even into the 1990s and early 2000s this was where "Houston" took off. A smaller Fairfield and some highway-side development like gas stations technically existed, and of course, by FM 1960 you were definitely in developed urban territory (though even that was far less developed), but Beltway 8 was a literally physical boundary that was the guardian between "there" and "here".

Until around 2012, there were a number of large signs near Beltway 8 that protruded above the freeway, for Taco Bell, Wendy's, and McDonald's (east side), and Chevron and Jack in the Box (west side)...if you were heading southeast toward Houston. As odd as it may seem, my best memories of driving through Houston included these, especially with my then-new iPod (November 2009 en route to Louisiana!) providing memorable tunes along the way, including "Red Barchetta" and "Death and All His Friends" (Rush and Coldplay, respectively), which for years I heavily associated with this intersection.

In March 2013, I managed to finally take a picture of them, but by that time, they were already shut tight (these were shut down in fall 2012). Interestingly, the pictures by Oscar "Erik" Slotboom published on his website was taken the exact same day. What an amazing coincidence! These pictures first appeared on my College Station-centric blog, Brazos Buildings & Businesses. Some of these are my friend's pictures, but he's given me permission to use them. As they're a bit much to describe in this one page, I've written parts on the "east side" businesses, with McDonald's (16001 Northwest Freeway), Wendy's (16006 Northwest Freeway), and Taco Bell all at The Houston Files. The ultimate reason they were torn down was a new longer ramp for Gessner/Senate access, and the businesses on both sides did not have enough room. Additionally, some of my old pictures included looking looking out toward Brake Check as well as a few others from other sources, like the Google Street View of McDonald's when it was still open, with the angle of looking up the sign, as well as the Bing Birds Eye view of Wendy's and Jersey Village Automotive.

Before describing the things here, another nice part of the interchange is the stoplight-like lights on the HOT lane (best visible westbound) slowly blinking in a way older lights can. It's a bit hard to describe if you don't have nostalgia for older stoplight/railroad crossing setups.

The other businesses are described below.

Eastbound (South)
16061 - Brake Check was here at least since 1985. It closed in 2012 with a sign inviting customers to another location at North Loop West and Ella Boulevard. Northwest of the Brake Check was a gas station torn down in the early 2000s. After Brake Check was torn down, a small connector was built between Hempstead Road and the frontage road to provide easier access between the two roads.

After the Senate Avenue intersection, there's another gas station remnant, as well as the fast food businesses mentioned above.

Additionally, in addition to the stores and services along 290, there were some other, older businesses off of Hempstead Road. Luckily I had added them to Wikimapia back a few years ago, and in case Wikimapia disappears, here's the scoop. They weren't easily visible from 290 (Beltway 8 yes, but you had to know where to look).

14900 Hempstead Road - This one was visible from the freeway easily, a large green warehouse known as Carpet, Texas when opened in February 2001. By the time it was closed and torn down in the early 2010s, it had morphed into a location of Jack's Carpet.

Here's a few more pictures from the old page. Views from Google I've collected below.

View from Beltway 8
View from the frontage road
View from above
View from...actually, I don't know where I got this, but it's JC in the Carpet Texas days

15702 Hempstead Road- Advanced Appliance & Electronics was demolished late 2014 but closed prior to April 2011.

15301 Northwest Freeway - Stonehaven Apartments opened right on the frontage road next to the park and ride ramp around 2007. They have no other access, and because they have low-income units for rent, it was partially paid with taxpayer money. It features 192 units and originally had a drainage area/pond in front the apartments, which disappeared in favor of a new frontage road.

16822 - The front of this Taqueria Arandas got mauled in the construction (it looked similar to what it does now, except it had curved "solarium" windows. It was originally a Kettle (no newspaper listings after 1994), with the first mention of it being Taqueria Arandas in 2003.

15830 - The most noteworthy thing here was a Chevron gas station, and that Chevron NEVER changed their sign from the solid red and blue when the rest did circa 2007-2008. I got a shot of the sign but better photos are from WHA and Houston Freeways (linked above). The sign existed for far longer than I expected it to, finally being torn down sometime around May 2015. Luckily, I got pictures of it and a few good views of it, and I'm thankful it stood for as long as it did. Google Maps Street View pictures are here and here. I took a few more pictures from my car, but they're not that great. Notice how the text pops out slightly: they don't make them like they used to. (August 2014, March 2015 1, March 2015 2).

15700 - Buried between the warehouses closest to the freeway was Saint Peter's Anglican Church. The church building was torn down between 2012 and 2013, but the church relocated.

As a closing note, here's something interesting: two pictures from the perspective almost a year apart, on the WB frontage road under the five-stack before the first stoplight. There's a big difference, and it's not just between the stoplights...

Picture from March 2015 - from under the five-stack

Picture from January 2016 - from under the five-stack, same place

<< Back to Jones Road
>> Next Exit: West Little York Road and Gessner Road